This October 14—528 years ago—Columbus seized his first seven slaves in the Caribbean, only two days after arriving on the island he named “San Salvador,” the Taíno Guanahaní. They were to serve as guides and interpreters. He wrote in his Journal that the island’s peoples were unskilled in arms and could be subjugated to do anything one wished. When promoting his second voyage in 1493, Columbus assured Queen Isabella, King Ferdinand, and the men enlisted that the indigenous people on “Española” would be subjugated easily because of their passivity, timidity, and inferior weaponry.

Columbus quickly found the assurances of passivity and timidity false when he returned to “Española” in November 1493. I’m now finishing the manuscript for Encounters Unforeseen: 1492 Retold’s sequel, which will depict the Taíno opposition to conquest over the period 1493–1498, including ambushes, sieges, skirmishes, and battles, all based on primary sources. Taíno weaponry was outmatched and they lost battles, but they bitterly fought them.

The greatest battle occurred in late March 1495, near the pilgrimage now known as Santo Cerro (Holy Hill) in the Dominican Republic. The following sketch of it appeared on the cover page of the first decade of Antonio de Herrera’s Historia General of the Indies, the Décadas, published in 1601 (see blog of March 14 for my pics at Santo Cerro). 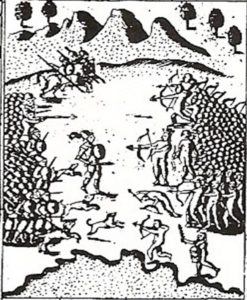 Discussion of Enemies of the Human Race