Taínos likely believed their islands were surrounded by an encompassing sea on a flat earth, with the heavens ascending above, the sea and underground caves descending below, and the sea and the heavens converging on the horizon―where the spirits they worshipped could pass from one to the other. Many also believed their Haiti lay at the center of this universe, and that mankind had lived in caves in the center of Haiti itself before emerging to populate the world.

Across the Atlantic Ocean, Queen Isabella and King Ferdinand of Spain had reconquered the Emirate of Granada from Islamic rulers in January 1492, and they now ruled the entire Iberian Peninsula, save for Portugal. As Aristotle had taught, they and learned Europeans believed that the earth was a globe. They understood its landmass, “terra firma,” stretched east from the Iberian Peninsula through Europe to Jerusalem―which the scriptures held to be at terra firma’s center―and then to the Indies. As Christians, they believed their God had blessed man’s creation and the earth to live on, separating terra firma from the seas, lighting the sky with the sun, moon, and stars, and providing man beast and fish to eat, all in but six days.

Europeans then often referred to the Atlantic Ocean as the Sea of Darkness, and almost all believed it extended west to the Indies, unbroken by any landmasses except known and possibly unknown islands. Most also believed that the distance west to the Indies was too far to sail, but Columbus argued otherwise when seeking Isabella and Ferdinand’s approval. See February 3 below for discussion of Columbus’s geographic theory and the Norse settlements in North America.

Columbus’s three ships departed Spain on August 3, 1492. After restocking food and supplies on the Canary Islands, they sailed west from the tiny Canary Island harbor at San Sebastian on Gomera―near where the photo below was taken―on September 6. They lost their last sight of land, the Canary Island’s tallest volcano (Teide on Tenerife)―in the photo’s background―on September 9. 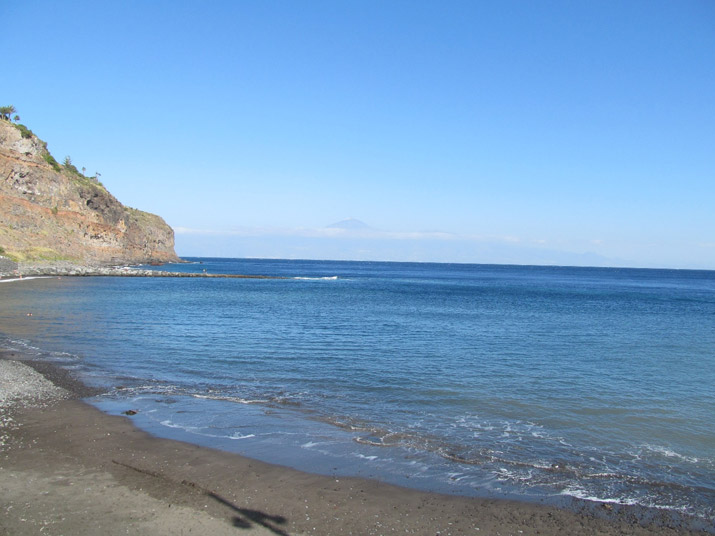