While the horizons remained landless, the crews of the Niña, Pinta, and Santa María were soothed that many birds were flying about—signaling land was nearby.

Peace then reigned on the Taíno Haiti (i.e., modern Haiti and the Dominican Republic), with five caciques (chiefs)—including Caonabó, Guacanagarí, and Guarionex—ruling separate chiefdoms. They were polygamous, taking wives from different villages to consolidate their power. They worshipped fruitful spirits to obtain these spirits’ alliance, as well as destructive spirits to obtain such spirits’ forbearance. Yúcahu, the fruitful spirit of yucca and male fertility and master of the sea, was the most important spirit in daily life. The sketch below, drawn for Encounters Unforeseen, depicts Yúcahu: 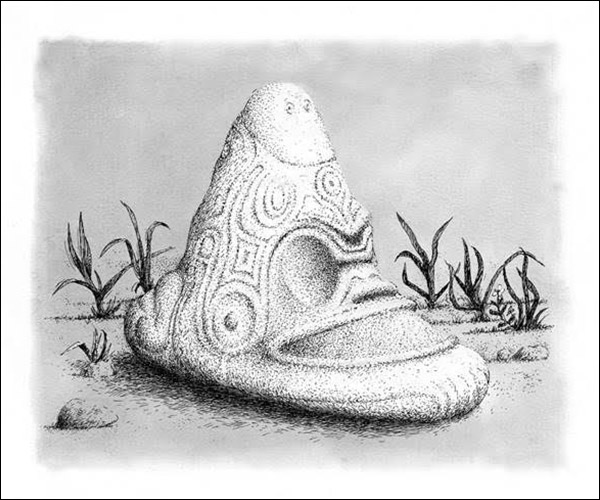 Isabella and Ferdinand were traveling from Zaragoza to Barcelona. They had departed Grenada in May after establishing their control of the conquered Islamic territory, as well as ordering the Jews expelled from their kingdoms, their stated purposes including to protect the Christian faith of their subjects.