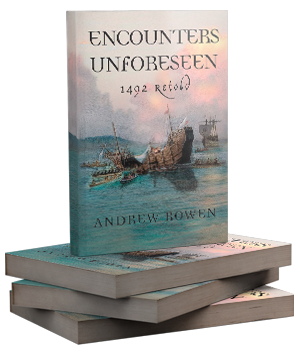 “…spellbinding…Few authors recreate historical worlds and craft characters who feel so real…I particularly enjoyed the way the soul of the Native Americans comes across the narrative. The characters are intriguing, each reflecting a rich culture and a historical background that will excite the reader.”
—Readers’ Favorite 5-Star Review Read Full Review

“A must read book for American history, European history, and Native American history! The author, Andrew Rowen has delivered an epic historical account…I can easily see this book becoming required reading in many educational settings. Fantastic voyage of the mind!! The readers are going to be talking about this book for decades to come!”
—Book Review Crew, Authors on the Air   Read Full Review

“The encounter of Columbus and Native Caribbean peoples set in motion events that created the modern world.  History books provide brief accounts, but what was the Encounter really like, what did it mean, how was it expressed, in simple, human terms?  Andrew Rowen transports us to this moment of creation, and does so by tracing the lives of the main protagonists. This is a fascinating story of enmeshed lives, and the consequences of new worlds.  It is written with scrupulous detail to historical accuracy, and, even knowing how it will end, the prose is an imaginative and entertaining portrait of a past we could not otherwise experience.”—William F. Keegan, Curator of Caribbean Archaeology, Florida Museum of Natural History, Talking Taíno, Taíno Indian Myth and Practice, The People Who Discovered Columbus, forthcoming Columbus was a Cannibal (and so are we).

“While the climax of the tale is the crucial point of discovery in 1492, the author begins the narrative in the middle of the 15th century, detailing Columbus’ childhood in Genoa, his early professional pursuits as a merchant and cartographer, and his unrelenting quest to win financial backing for his bold expedition directly across the ocean to the Indies. Rowen also adroitly reconstructs Queen Isabella’s tortured ascendancy to the throne and the political intrigue she navigated since she was a teenager. But most impressively, without the benefit of any written Taino history, the author re-creates the lives of the natives long before Columbus arrives, chronicling the paths of three tribal leaders—caciques—and their varying responses to the European visitors they first believe, in their ghostly pallor, look like spirits or corpses…. Rowen’s research—a combination of scholarly investigation and travel conducted over six years—is nothing less than breathtaking. The sensitivity and originality of his portrayals are equally impressive, avoiding the trap of simply retelling a familiar tale from an exclusively European perspective or casting the explorers as nothing more than rapacious colonialists.

Furthermore, the tale intelligently captures the religious impulse behind Columbus’ adventure as well as the Spanish Inquisition: the powerful Christian devotion of Queen Isabella and King Ferdinand. A remarkably new and inventive take on a momentous episode in the 15th century.” —Kirkus Reviews   Read Full Review

“The story of Europe’s first encounters with the Americas has become so fraught and tortured that most people now avoid it, which is a shame, because it is so historically important. With Encounters Unforeseen, this fascinating story becomes human and real. Andrew Rowen has produced a remarkable work – beautifully written, well researched and necessary. A landmark!” —Warren Kozak, LeMay: The Life and Wars of General Curtis LeMay