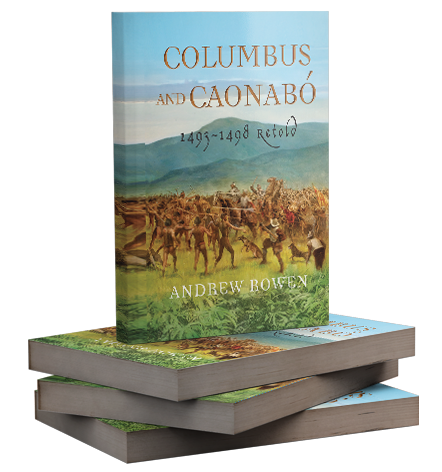 Columbus assured Spain’s Queen Isabella and King Ferdinand that he’d conquer “Española” with little opposition from its inhabitants, but he soon discovered the promise ominously false. A historical novel, Columbus and Caonabó: 1493–1498 Retold dramatizes his invasion of the island on his second voyage and the bitter resistance mounted by its Taíno peoples, led by the Taíno chieftain Caonabó. Based closely on primary sources, the story is told from both Taíno and European perspectives, including through the eyes of Caonabó and Columbus.

Chief Caonabó opposes any European presence on the island and massacres the garrison Columbus left behind on his first voyage. When Columbus returns, the second voyage’s twelve-hundred settlers suffer from disease and famine and are alienated by his harsh rule, resulting in crown-appointed officers and others deserting for Spain. Sensing European vulnerability, Caonabó establishes a broad Taíno alliance to expel the intruders, becoming the first of four centuries of Native American chieftains known to organize war against European expansion. Columbus realizes that Caonabó’s capture or elimination is key to Española’s conquest, and their conflict escalates—with the fateful clash of their soldiers, cultures, and religions, enslavement of Taíno captives, the imposition of tribute, and hostile face-to-face conversations.

As battles are lost, Caonabó’s wife Anacaona anguishes and considers how to confront the Europeans if Caonabó is killed. The settlers grow more brutal when Columbus explores Cuba and Jamaica, and his enslaved Taíno interpreters witness them forcing villagers into servitude, committing rape, and destroying Taíno religious objects. Chief Guarionex, whose territory neighbors Caonabó’s, studies Christianity with missionaries and observes the first recorded baptism of a Native in the Americas but ultimately rejects his own conversion. All brood upon the spirits’ or Lord’s design as epidemic diseases ravage the island’s peoples. Isabella and Ferdinand are disturbed when Columbus initiates slave shipments home, but they deliberately acquiesce—and the justification for the European enslavement of Native Americans begins to evolve.

Readable independently, the novel is the sequel to Encounters Unforeseen: 1492 Retold, which portrays the lives of the same Taíno and European protagonists from youth through 1492.

There are forty-two historic or newly drawn maps and illustrations woven into the narrative, including portraits or sketches of Columbus, Caonabó, Isabella, and Anacaona.

Scenes and dialogues often are constructed from the historical record. Caonabó punishes Chief Guacanagarí for harboring the Europeans of the first voyage, and Columbus pursues Guacanagarí’s support and Guarionex’s neutrality when war looms. But Columbus struggles against the disloyalty and mutiny of his own men, and his punishments of settlers grow harsher, triggering rebellion. The settlers’ atrocities and discord fuel Taíno resistance.

Bakako—Columbus’s principal enslaved interpreter—is shamed by his role, seeks solace with a lover, and eventually is married to Guarionex’s sister to bind a “treaty” Columbus imposes on Guarionex. Guarionex has piercing debates with the missionary Ramón Pané contrasting Christianity and Taíno spirits. Anacaona toys with and deceives Columbus’s brother Bartholomew when he comes to subjugate. Returning to Spain, Columbus pursues a third voyage in the face of resounding criticism, brooding on his destiny to fulfill Isaiah’s prophecies and writing a will exalting his repressed Genoese heritage.

The novel’s text often relates: the substance of the correspondence and orders between Columbus, Isabella and Ferdinand, and crown officials in Spain and Española, including Columbus’s Libro Copiador; the histories by Las Casas, Martyr, Bernáldez, Oviedo, Ferdinand Columbus, and other chroniclers; and the letters and accounts of doctors, missionaries, and others who traveled to Española from 1493 to 1498, including Pané, Cuneo, and Roldán. The depiction of Taíno actions and thoughts reflects the analyses of anthropologists and other experts seeking a more complete and bias-free understanding. Isabella’s deliberations regarding the enslavement of Native Americans reflect the constraints of Pope Alexander VI’s papal bulls. A Sources section cites sources and discusses limitations and alternative interpretations of the historical record.