The sequel to Encounters Unforeseen will depict Queen Isabella’s decisions from 1493–1498 with respect to the enslavement of each of four shipments of Native American captives that Columbus or his brother dispatched to Spain during this period.

Isabella and King Ferdinand reviewed a parade of the first dozen captives in the spring of 1494, while their court resided in Medina del Campo, then a vibrant commercial town near Valladolid in northern Castile. Columbus had taken about thirty captives—both Caribes and Taínos—while sailing through the Lesser Antilles in November 1493, but over half had died of European diseases or escaped prior to the audience.

Isabella and Ferdinand’s review likely occurred in or before the small royal palace located on Medina del Campo’s central plaza or in the formidable fort nearby, known as La Mota. Curators at both sites speculated to me that audiences of this type usually occurred in the palace or before it in the plaza because the sovereigns resided there and visited the fort typically only for military reviews. The following photos show the preserved façade of the palace, the plaza, and the fort. The palace is now known as the Palacio Real Testamentario because Isabella died there in 1504. 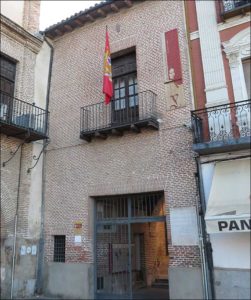 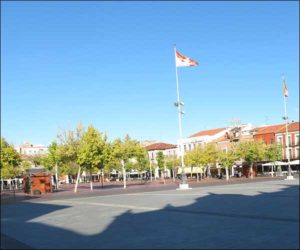 The courtier presenting the captives in 1494 relayed Columbus’s proposals that they be enslaved to serve as interpreters to convert Indians in “Española” to Christianity and that an ongoing slave trade of Caribes be established to barter for or finance Española’s provisioning (Columbus’s vision was slaves for cattle). History is clear that, on this first occasion, Isabella chose to postpone a decision whether she would permit Columbus to establish a slave trade in Native Americans generally. She was comfortable that Columbus already had enslaved captives to serve as guides and interpreters and that the captives presented to her could be enslaved to serve as interpreters in Española. Historians disagree whether some of the captives simply were sold as slaves to recoup expenses of the second voyage, with or without Isabella’s knowledge. My analysis is that—however enslaved—the dozen soon died in Spain of European diseases.