Pope Alexander VI’s Bulls, the “Doctrine of Discovery” and the Treaty of Tordesillas

In 1493, after Columbus’s first voyage, Pope Alexander VI issued papal bulls “awarding” Spain dominion over “Española” and other lands Columbus had “discovered,” i.e., the Taíno homeland, reasoning that the Lord was pleased that “barbarous nations” be overthrown and brought to the faith. As depicted in Encounters Unforeseen, popes then asserted responsibility for the salvation of all men and authority to regulate their relations, including their conquest and enslavement, both among Christians and non-Christians. The image below is a portrait of Alexander (courtesy of the Corridoio Vasariano, Uffizi Gallery, Florence). 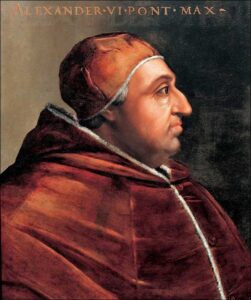 The bulls established a longitudinal line in the Atlantic Ocean 100 leagues west of the Cape Verde Islands and “granted” Spain territory “discovered” west of the line so long as not actually possessed by another Christian prince. The bulls also proclaimed that Christian princes owed the papacy a duty to bring the peoples in lands so awarded to the faith.

In the short term, as narrated in Columbus and Caonabó, Alexander’s bulls sanctioned Queen Isabella and King Ferdinand’s invasion and conquest of Española. The missionary duty imposed by the bulls also briefly constrained their consideration of Columbus’s repeated requests to establish a slave trade in indigenous peoples.  Portugal’s King Joâo II was enraged by and contested the bulls, believing that prior papal bulls had awarded Columbus’s “discoveries” to Portugal.

Over centuries following, the “doctrine of discovery” enunciated in the bulls—that a Christian “discoverer” of Native land was entitled to take possession and usurp the Natives’ ownership of it—became a fundamental justification for the European invasion and appropriation of Native land throughout the Americas. The doctrine was recognized as justification in U.S. constitutional law beginning in 1823 with Chief Justice John Marshall’s opinion in Johnson v. McIntosh.

The Treaty of Tordesillas, executed in Tordesillas, Spain, on June 7, 1494 (528 years ago), settled Spain and Portugal’s disagreement over the appropriateness of Alexander’s division of the world vis-à-vis each other (i.e., disregarding the Taínos’ dominion over Columbus’s “discoveries” already then proclaimed), and Columbus and Caonabó contains a scene dramatizing the negotiations between Joâo’s ministers and Isabella and Ferdinand. Joâo never accepted that Columbus had reached Asia and firmly suspected that there was an “undiscovered” continent in the southern hemisphere. The essential compromise of the treaty was to move Alexander’s line farther west—to 370 leagues west of the Cape Verde islands—and affirm Portugal’s right to territory east (encompassing, as later understood, a portion of modern Brazil). Spain also reaffirmed Portugal’s “exclusive right” to circumnavigate Africa to reach the Indies.

While negotiating, Isabella and Ferdinand resided in a palace dear to her father, with a vista of the Duero River and farmland beyond, as shown in the first photo. The treaty was agreed in an adjacent palace, shown in the second photo, which now serves as the treaty’s museum. The demarcation line is portrayed in the Cantino Map of 1502, shown below (contained in Columbus and Caonabó). 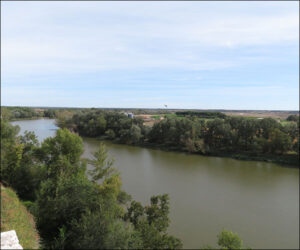 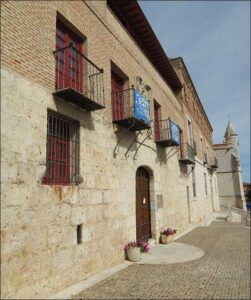 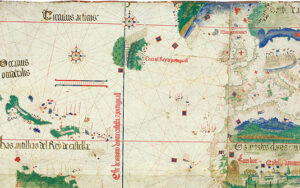 Terminus of Cuban Exploration and the Oath
Cabo Cruz, Macaca