Terminus of Cuban Exploration and the Oath

After departing Cabo Cruz, Columbus’s caravels coursed the long stretches of Cuba’s southern shoreline that are hazardous to navigate, including south of Camagüey and around the Zapata peninsula. The waters frequently are shallow and appear “milky,” tangled with an extended labyrinth of tiny coral islands and shoals, mangrove swamps, and sandbars, as shown in the first two photos below (offshore La Salina, Zapata peninsula). The ships grounded frequently, abruptly grating the hulls against coral to puncture leaks and wrenching the rigging and equipment, torturing the crews’ patience and draining their stamina. Most of the provisions stored were lost overboard or rotted in severe storms, so the crews hungered except for the fish, turtles, and birds they caught. 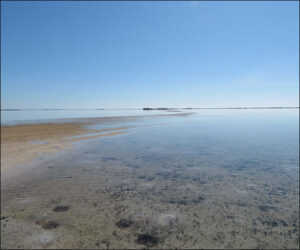 But the labyrinths possessed an eerie majesty, and the area is home to an astonishing breadth of birdlife, as shown in the third photo (in Salina’s famous wildlife preserve). Columbus named the waters offshore Camagüey El Jardíne de la Reina (the Queen’s Garden).

Through his enslaved Taíno interpreter, Columbus often inquired whether Cuba was the “mainland” or an island. From east to west, Cuban chieftains replied it was an island, although not unanimously, sometimes hedging that Cuba’s west was far distant and they hadn’t visited a western tip themselves.

As depicted in Columbus and Caonabó, by early June the ships were dangerously worn, with sails torn, rigging frayed, and hulls sieving. Columbus concluded the risks of sailing on were no longer tolerable and that the crews couldn’t be pushed further, as fear mounted whether the hulls could survive the return voyage. Civilizations described by Marco Polo hadn’t been found, but neither had a western tip for Cuba. Regardless of the chieftains’ responses, Columbus refused to accept that Cuba might yet be an island, insistent on establishing he’d arrived in the Indies, reasoning islands didn’t have such a lengthy coastline and none they met confirmed actually sighting its western tip.

On June 12, 1494 (528 years ago), Columbus brought the caravels to anchor in the modern Bahía de Cortés in western Cuba, shown in the next two photos, and heartened the crews by announcing they were turning back. He also required them to swear an oath that Cuba was part of the Asian mainland (i.e., terra firma) and agree that remarking to the contrary was punishable by the tongue’s excision or a hundred lashes. He believed and asserted that the ships were traversing the Malay peninsula or nearby. 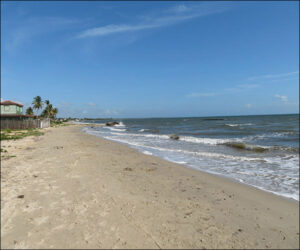 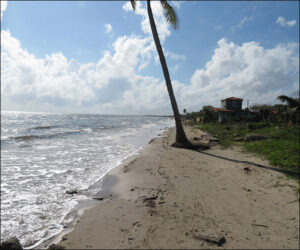 European crew members didn’t pay much attention to the oath after Columbus was discredited, and the oath marginally contributed to the criticisms he wasn’t fit to govern that culminated in his removal from Española’s governorship in 1500. The future explorer and mapmaker Juan de la Cosa served on the exploration and took the oath, and his famous world map drawn in 1500 (in the collection of Madrid’s Naval Museum) shows Cuba as an island (the final image below, a portion of the map). Crew members—and some of Columbus’s European detractors—did consider the perilous voyage as reaffirmation that his seamanship was exceptional.

Judgment of One’s Soul
Pope Alexander VI’s Bulls, the “Doctrine of Discovery” and the Treaty of Tordesillas