Oath at Cortés and Taíno Geographers

Encounters Unforeseen: 1492 Retold dramatizes 1492 from the perspective of both Taíno and European protagonists, including depicting Taíno geographic knowledge, Columbus’s cartographic and scriptural arguments that he’d arrive in the “Indies,” and his reliance on enslaved Taíno guides and interpreters to navigate their homeland. Today, I share pics and research from my recent trip to Cuba regarding a geography-related event occurring during Columbus’s second voyage that I’ll present in the sequel (1493–1498)—the oath Columbus required of his sailors while exploring Cuba and the information imparted by his Taíno slave that he didn’t accept.

Columbus began reconnoitering Cuba’s southern coast in late April 1494, already believing it terra firma’s eastern tip (see prior blog), and by mid-May he was coursing the long stretches of shoreline that are hazardous to navigate, including south of Camagüey and around the Zapata peninsula. The waters frequently are shallow and appear “milky,” tangled with a maze of reefs, sandbars, and tiny islands, as shown in the first two photos below (offshore La Salina, Zapata peninsula), and the area is home to an astonishing breadth of birdlife, as shown in the third (in Salina’s famous wildlife preserve). Columbus was struck by the coastline’s mystical beauty and named the area south of Camagüey the “Queen’s Garden,” in honor of Queen Isabella. But his three ships repeatedly scraped the bottoms, sprung leaks, and lost most of their food in bad weather, so the crews hungered except for the fish, turtles, and birds they caught. 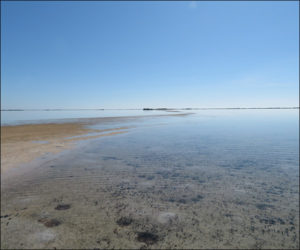 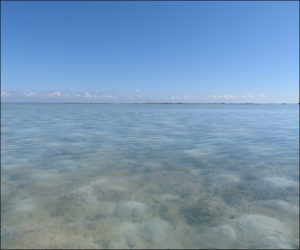 The Taíno slave who participated on the exploration is known to history principally by his baptized name conferred in Barcelona in 1493, “Diego Colón.” Columbus had seized “Diego” on the Taíno Guanahaní (San Salvador) in October 1492 and relied on him and other captives to learn of and navigate to Cuba and “Española” on the first voyage, which they advised were islands. Columbus also had used their knowledge of the Caribbean archipelago farthest east of Española—the Lesser Antilles—to plot a shorter, open-ocean portion of the crossing from Spain on the second voyage than the direct route to Española (see blog of May 17, 2019, with pics of Dominica).

In 1494, Diego was responsible for asking Cuban chieftains how to navigate the hazards, and Columbus often prompted him to inquire whether Cuba was the “mainland” or an island. From east to west, the Cuban chieftains replied it was an island, although not unanimously, sometimes hedging that Cuba’s west was far distant and they hadn’t visited a western tip themselves.

The ships labored west through early June, when Columbus feared additional damage might jeopardize returning to Española and that he couldn’t press the crews further. Civilizations described by Marco Polo hadn’t been found, but neither had a western tip for Cuba. Regardless of the chieftains’ responses, Columbus refused to accept that Cuba might yet be an island, yearning proof he’d arrived in the Indies, reasoning islands didn’t have such a lengthy coastline and none they met confirmed sighting its western tip.

On June 12, 1494—526 years ago—Columbus brought the ships to anchor in the Bahía de Cortés in western Cuba, shown in the next two photos, and heartened the crews by announcing they were turning back. He also required them to swear an oath that the mainland had been discovered and consent that remarking to the contrary was punishable by the tongue’s excision or a hundred lashes. He believed and asserted that the ships were traversing the Malay peninsula or nearby. 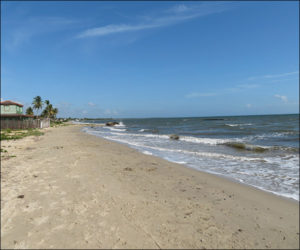 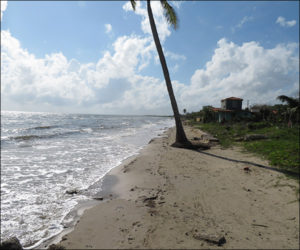 European crew members didn’t pay much attention to the oath after Columbus was discredited. The future explorer and mapmaker Juan de la Cosa served on the exploration and took the oath, and his famous world map drawn six years later (displayed in Madrid’s Naval Museum) shows Cuba—as an island (the final image below, a portion of the map).

Discussion of Enemies of the Human Race
Columbus and Fidel