In August 1494 (528 years ago), Columbus’s caravels circled counterclockwise along the southern coast of the Taíno Yamaye (Jamaica), returning from Cuba to “Espanola.” During his absence from Española, Queen Isabella and King Ferdinand had heard criticisms of his leadership and, on August 16, would dispatch him a letter requesting their closer supervision, albeit supportive. Unknown to the three of them, governance at the settlement at Isabela had critically deteriorated, with Columbus’s senior crown-appointed leadership—Pedro Margarite and Fray Buil—openly feuding with Columbus’s brothers, Bartolomé and Diego Colón.

As depicted in Columbus and Caonabó, Chief Caonabó also had continued building his alliance among chieftains to forcibly expel the Europeans from the island and taken initial hostile steps, ordering caciques living near Fort Santo Tomás to withhold food from and starve out its garrison and approving executions of Europeans traveling alone. But Guarionex, chieftain of Magua and Caonabó’s peer and contemporary, wouldn’t commit to the alliance without first trying himself to reason with Columbus. The chieftain was renowned for his knowledge of Taíno spirits and generally favored resolving discords peacefully, with reciprocity and compromise rather than war.

To that end, Guarionex had sought unsuccessfully to parley with Columbus following the latter’s trespass into Magua to establish Fort Santo Tomás (see post of March 12). After returning from Cuba, Columbus himself would seek the parley, keen to persuade Guarionex not to fight with Caonabó. Columbus and Caonabó dramatizes Caonabó’s outreach to, and then Columbus’s meetings with, Guarionex, as well as Guarionex’s decision making, bitter disillusionment, and eventual resolve to fight.

It’s ultimately through Guarionex that we know about the Taíno religion in the form practiced in the 15th century. The friar Ramón Pané lived and conversed intimately with Guarionex when compiling Pané’s study of the religion and teaching Guarionex about Christianity (which Guarionex rejected, see post of September 12, 2021).

Guarionex ruled from—and first parleyed with Columbus in—his village of Guaricano, located near the base of the hill now known as Santo Cerro in the central valley of the modern Dominican Republic. I repost a portion of the map of “Espanola” (contained in Columbus and Caonabó) showing Guarionex’s chiefdom and Guaricano, indicating the geographic importance of his alliance to each of Caonabó and Columbus. The first photo, taken from atop Santo Cerro, shows in the foreground the approximate area of Guaricano, and the ground-level photos were taken in that area. 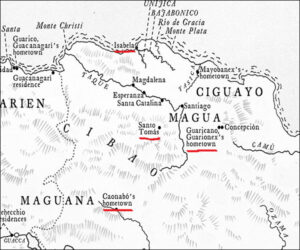 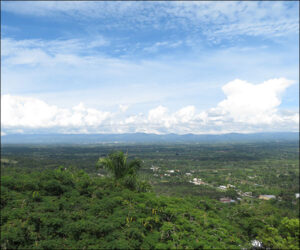 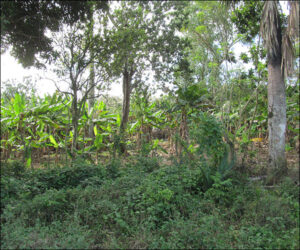 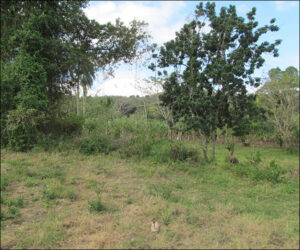 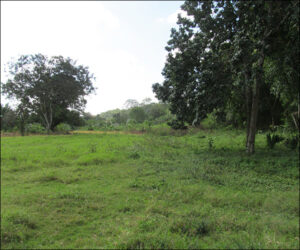 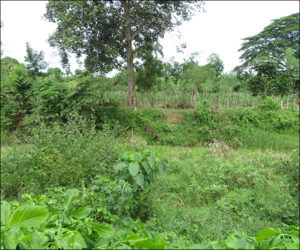 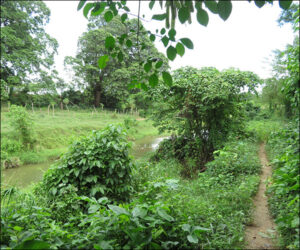