Encounters Unforeseen: 1492 Retold dramatizes the history leading to 1492 from the perspective of both Taíno and European protagonists, including depicting the weddings and marriages of three couples—Spain’s Queen Isabella and King Ferdinand, Columbus and his Portuguese wife Felipa Moniz Perestrelo, and—the subject of this blog—the Taíno chieftains Caonabó and Anacaona. All three 15th century marriages were conceived for political, strategic, or career purposes, although love followed to varying degrees. (Happy Valentine’s Day!)

Prior to 1492, Caonabó rose to rule the Taíno chiefdom of Maguana, with his principal residence at the Corral de los Indios, a Taíno ball court that remains preserved in the modern city of San Juan de la Maguana, Dominican Republic. Anacaona was born into the ruling family of the neighboring chiefdom to the southwest, Xaraguá, in modern Haiti, and their marriage allied the two chiefdoms. Anacaona—a poet and reputed the island’s most beautiful woman—went to live in Maguana following the wedding, and the first two photos show statues of Caonabó and Anacaona found in San Juan de la Maguana today, followed by a map showing the chiefdoms (included in Encounters Unforeseen). 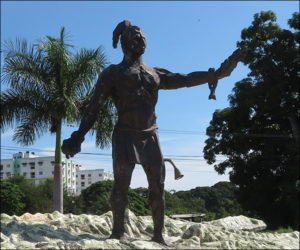 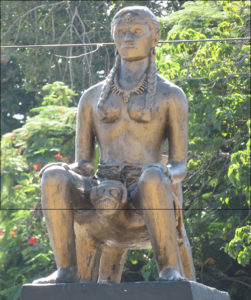 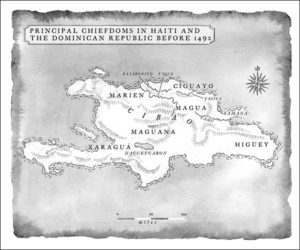 The historical record doesn’t provide the couple’s precise birthdays or wedding date, but Caonabó likely was in his forties in 1492, and, while some writers disagree, Anacaona likely in her twenties. The Taíno chieftains were polygamous, and Caonabó would have had over a dozen wives when they were married, similarly chosen to cement his influence in local chiefdoms.

Caonabó was the first indigenous chieftain in the Americas to attack Spanish settlements. Columbus relentlessly sought his capture and to haul him to Spain to submit as vassal to Isabella and Ferdinand, and the next photo is the statue in San Juan de la Maguana showing Caonabó aboard ship when Columbus departs “Española” for Spain in 1496.

Columbus brutally subjugated Maguana in 1495, and, having lost her husband, Anacaona eventually returned to Xaraguá and ruled as its chieftain after her brother’s death. On my recent trip to the Dominican Republic to research 1493–98, I explored territory she likely traveled en route to Xaraguá—south through the fertile Valle de San Juan, over the Sierra de Neiba, into the enchanting Valle de Neiba, and then along Lake Enriquillo to the Haitian border (I didn’t enter Haiti this trip). The photos below show: a fertile yucca field nearby the Corral de los Indios, the San Juan River, the Neiba Valley and Lake Enriquillo’s eastern tip, the route west to Haiti along the lake, and a view of Anacaona’s Xaraguá and Haiti’s beautiful Lake Étang Saumâtre. 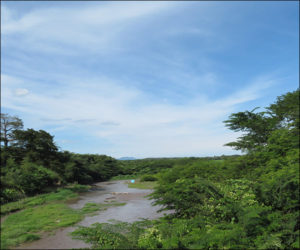 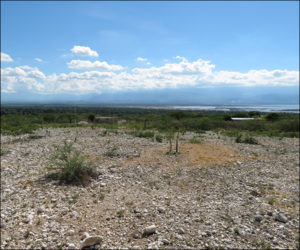 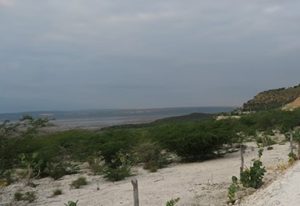 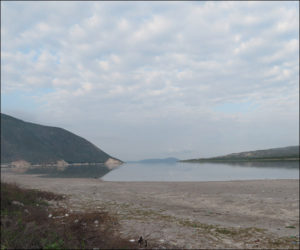 There’s a photo of the Corral de los Indios in the sketch of Caonabó under 1492 Blogs.