The first major battle in the Americas between Spanish conquerors and indigenous peoples occurred 525 years ago, in late March 1495, near the pilgrimage now known as Santo Cerro (Holy Hill), north of the city of La Vega in the Dominican Republic’s fertile Cibao Valley. A Taíno army under the command of one of Chieftain Caonabó’s brothers surrounded and fiercely attacked a far smaller squadron of Columbus’s men and Taíno allies but was unable to annihilate them.

Last November, I spent a day around Santo Cerro researching the battle, which I’m dramatizing in Encounters Unforeseen: 1492 Retold’s sequel (1493-98). The contemporaneous primary accounts (all European) relate a series of skirmishes along the Yaque River and in the Cibao Valley, and Columbus and Queen Isabella’s chronicler Peter Martyr both indicate the major culminating battle occurred in the latter area—near a great hill, according to Columbus. Modern Christian tradition holds that fighting took place on Santo Cerro’s commanding heights (where the lovely church Santuario Nuestra Señora de las Mercedes now sits) and that Columbus and his men were saved through divine intervention. According to Columbus and Martyr, the decisive fighting occurred on more level ground, where the Spaniards’ small horse cavalry could charge.

The Taínos’ arrows and spears couldn’t overcome the Spaniards’ cavalry, guns, and attack dogs, and the Taíno warriors eventually dispersed, with some fleeing and others subsequently captured and enslaved. As many (but not all) historians, I believe Chieftain Manicoatex was the Caonabó brother who led the Taíno army.

The two photos below show the spectacular views of the Cibao Valley from Santo Cerro, the first with the pilgrimage’s cross and the second looking westward, the direction from which the Spaniards likely arrived (marching from their settlement at Isabela) to engage the Taíno forces. 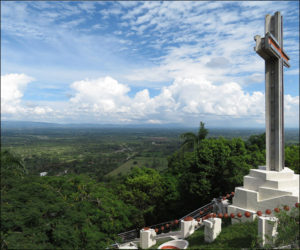 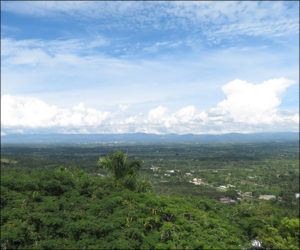 Chieftain Guarionex ruled from a village located in the left foreground of the second photo.

Columbus and Fidel
Caonabó and Anacaona