In March 1496, Columbus departed the settlement at Isabela to return to Spain, having instructed his brother Bartolomé to establish a new capital to be named “New Isabela” on “Española’s” southern coast, nearby gold deposits. Bartolomé selected a site on the Ozama River’s east bank, constructing first a fort and wooden church. The photo below shows the church of Our Lady Virgin of the Rosary, a modern reconstruction of one built in the 1540s at the site of Bartolomé’s church, in Santo Domingo’s Archaeological Park of New Isabela. Archaeologists have found post holes of the predecessor church and the remains of the fort’s dungeon, where Columbus likely was imprisoned briefly when deposed from ruling Española in 1500. 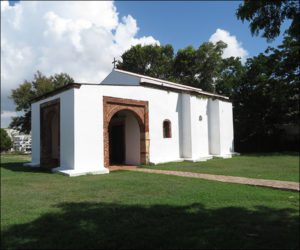 Bartolomé disregarded Columbus’s instruction and named the new town “Santo Domingo,” in honor of their father Domenico, and sanctified the name by celebrating the town’s founding on the feast of St. Dominic on a Sunday (“Domingo” in Spanish) in August 1496. The next photos show a view of the church from the Ozama’s west bank and a view upriver. 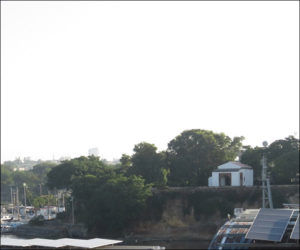 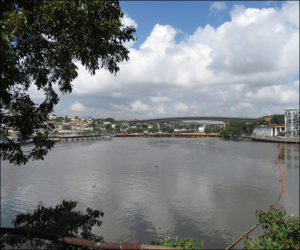 In 1502, Queen Isabella and King Ferdinand installed Nicolás de Ovando as the island’s governor, and Ovando commenced construction on the Ozama’s west bank, including a new fort, the Ozama Fortress. The following photos show the fortress and a view from the church across the river, through the bustling port. 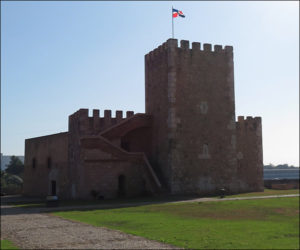 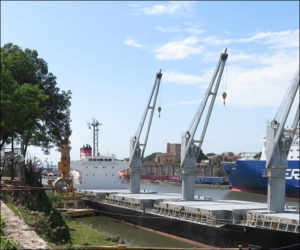 In 1503, Ovando largely completed the island’s brutal conquest commenced by Columbus, including subjugation of the Xaraguán chiefdom in the southwest, then ruled by the lady chieftain Anacaona. The central plaza near the fortress, now known as the Parque Colón, holds a 19th century statue sculpted from a conquering European perspective of Columbus with a Taíno woman at the pedestal beneath—many say Anacaona, as shown in the last photo (with pigeons). 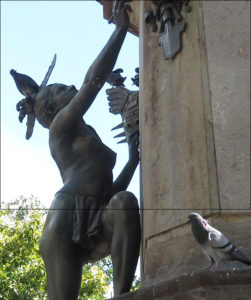