This fall, I traveled to Spain to research events from 1493 to 1498 that I’m depicting in the sequel to Encounters Unforeseen, including visiting sites where Queen Isabella and King Ferdinand made fateful decisions regarding “Española’s” subjugation or—as related in this blog—where Columbus took Taínos.

Columbus’s second voyage departed from Cádiz in September 1493 with seven Taínos he’d brought to Spain on the first voyage, six enslaved to serve as interpreters and a representative whom Chief Guacanagarí had dispatched to meet Isabella and Ferdinand. Columbus returned to Cádiz in June 1496 with about thirty Taínos and Caribs, and these Taínos included one of Chief Caonabó’s brothers and a nephew, as well as two new interpreters.

Cádiz then had a substantial Genoese community representing Genoa’s merchant trading families, including the Spinolas, di Negros, Centuriones, and Dorias mentioned in Encounters Unforeseen. Historians of Cádiz believe Columbus resided in one of the families’ homes in the old city center, both in September 1493 and June 1496. He worshipped at the Santa Cruz Church shown in the following photo, then Cádiz’s main cathedral, where the Genoese families maintained a chapel. The seven Taínos who departed Cádiz in 1493 and the four noted above arriving in 1496 likely received their ongoing Christian instruction there. 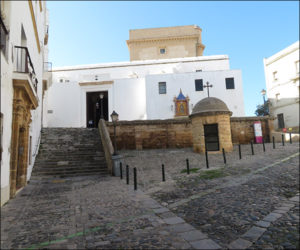 In late June 1496, Columbus spent a week in the home of Andrés Bernáldez, the curate of Los Palacios (near Seville). Bernáldez wrote a history of Isabella and Ferdinand’s reign, including chapters about Columbus’s voyages, and his history records that he hosted Columbus and Caonabó’s brother in his home. The next photos are the homes rebuilt on the site of Bernáldez’s home (as the plaque on the wall commemorates) and, across the street, Bernáldez’s church, still functioning. 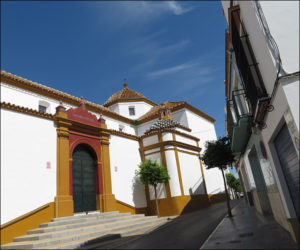 Columbus then traveled north to meet Isabella and Ferdinand. The historical record indicates the two Taíno interpreters were baptized Cristóbal and Pedro in Guadalupe at the Monastery of Santa de María de Guadalupe, shown below, in July 1496.