The twelve ships Columbus had dispatched to Spain from Isabela on February 2, 1494 (see post of February 2), arrived Cádiz on March 7, and the surviving indigenous captives he’d taken on Guadeloupe and St. Croix (see posts of November 4 and 14) were transferred to the custody of the financier Juanoto Berardi.

As depicted in Columbus and Caonabó: 1493–1498 Retold, Berardi was then the leading Florentine slave-trader resident in Seville and well known at Queen Isabella and King Ferdinand’s court and to Columbus. He had contributed financing to the sovereigns’ Canary Island conquests and to both of Columbus’s voyages, and he’d provisioned food for the second. He’d also lodged in Seville the ten Taínos Columbus had hauled to Spain on the first voyage. Berardi’s principal business associate was another Florentine, then unknown, who would succeed to Berardi’s business on Berardi’s death and eventually become well known to Isabella, Ferdinand, and Columbus—Amerigo Vespucci.

In late March or early April 1494 (528 years ago), Berardi himself likely paraded about a dozen of the indigenous captives before Isabella and Ferdinand while the court resided in Medina del Campo, then a vibrant mercantile city set in rolling farmland in northern Castile. I suspect Isabella and Ferdinand’s review occurred in or before the small royal palace located on Medina del Campo’s central plaza, now known as the Palacio Real Testamentario (because Isabella died there in 1504).

History is clear that, at this time, Isabella chose to postpone a decision whether she would grant Columbus the permission he sought to establish a slave trade in Native Americans generally. She was comfortable that Columbus already had enslaved captives to serve as guides and interpreters and that the captives then presented to her could be enslaved to serve as interpreters in Española.

Historians disagree whether some of the captives simply were sold as slaves to recoup expenses of the second voyage, with or without Isabella’s knowledge. My analysis is that—however enslaved—the dozen soon died in Spain of European diseases.

The photos below are of the remaining façade of the palace and Medina del Campo’s central square. 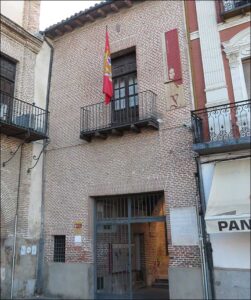 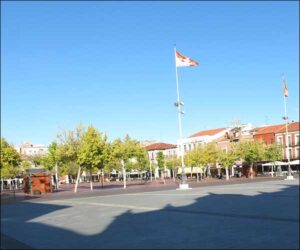