Chief Caonabó, in Columbus’s Own Words

Contemporary Spanish chroniclers of 1492—including Bartolomé de Las Casas—relate information about Chief Caonabó’s personality and his battle against Columbus’s invasion of “Española.” Most chroniclers derived this information largely through conversations with Columbus or Spaniards who accompanied him on his second voyage. Las Casas—who lived some years on Española—also spoke with Taínos who knew Caonabó, including Caonabó’s younger brother Chief Manicoatex. Columbus is the primary source who knew Caonabó face-to-face, and as many antagonists have done through history, Columbus recorded his own observations about his principal Taíno enemy.

These observations are contained in the copies of letters Columbus wrote to Queen Isabella and King Ferdinand known as the Libro Copiador (“copybook” or “copied letters”), which were discovered in 1985 and since considered authentic by Spanish historians. Historians generally conclude that these letters don’t add to the prior understanding of Columbus’s personality or legacy (I agree), but I’ve found they add information about his meetings with Española’s principal chieftains and his reaction to Española’s staggering population decline.

“no one is bolder or more daring in war”

“all the island’s chiefs watch what he does closely and no longer have any fear, being emboldened by his killing of Christians”

“he will tell everything about this land better than anyone, because there is no kind of thing he does not know about”

Columbus and Caonabó contains a new sketch of Caonabó (drawn by the Dominican illustrator Boris De Los Santos), set beside a copy of the portrait of Columbus hanging in Genoa’s Galata Museum, both shown below. 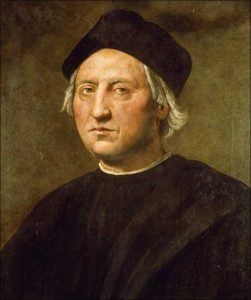