When authorizing Columbus’s second voyage, Spain’s Queen Isabella and King Ferdinand instructed him to convert “Española’s” peoples by all ways and means. Pope Alexander VI had pronounced that the Lord was pleased for barbarous nations to be overthrown and brought to the faith and coupled his “award” of Española and other territories to the sovereigns with a duty to evangelize the inhabitants.

Regardless of this instruction and duty, only about a dozen of the twelve hundred recruits sailing on Columbus’s second voyage were missionaries—many more were soldiers, and almost all enlisted with the dream of finding gold. The missionaries’ leader, whose appointment Alexander had affirmed, deserted his post in 1494, and the first recorded baptisms of Taínos on Española didn’t occur until 1496. The contemporary chronicler Bartolomé de Las Casas thought the effort was meager.

That said, there were a few missionaries with zeal, in particular a friar Ramón Pané, a Catalan. Pané had served prior to the voyage in the Monastery of Sant Jeroni de la Murtra in Badalona, Spain (north of Barcelona). The first photo below is of the monastery, the second its monument to Pané. 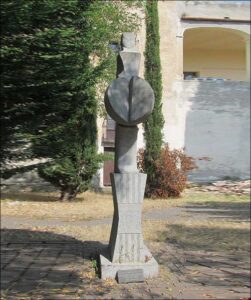 Columbus and Caonabó: 1493–1498 Retold includes scenes envisioning how Pané surmounted the language barrier to teach in a small village, the first baptism, and Pané’s instruction of the Taíno chieftain Guarionex, who was renowned for his wisdom of Taíno religion and ultimately rejected Christianity. Guarionex’s hometown, and I suspect the nearby site of the first baptism, lay somewhere within foreground of the following photo (taken from the pilgrimage known as Santo Cerro, north of La Vega, Dominican Republic). 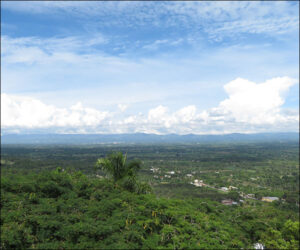 The small number of baptisms of Taínos from 1493 to 1498 is often attributed to the lack of missionaries, the language barrier, the absence of interpreters, and Columbus’s failure to approve baptisms. But those reasons can’t explain Guarionex’s rejection of baptism. As depicted in Columbus and Caonabó, I believe Guarionex was devoted to his Native religion, doubtful of Christ’s goodness, and opposed to assuming the invaders’ religion.

Chief Caonabó, in Columbus’s Own Words