Punishment at the Yaque

In April 1494, Columbus’s lieutenant sliced off a Taíno youth’s ears as punishment for the theft of clothing of Spaniards fording the Yaque river while traveling on the trail between the two settlements. Columbus announced he would behead the youth’s chieftain and others for their complicity in or failure to punish the disobedience. He later commuted the beheadings following pleas for mercy, satisfied other chieftains had been warned of his expectations. But the event actually drove the island’s most powerful chieftains toward an alliance to expel the Europeans from their homeland.

The initial trail from Isabela to Santo Tomás likely crossed the Yaque near its juncture with the Mao river in the Dominican Republic’s Valle del Cibao. In researching Encounters Unforeseen’s sequel, I took the following photo of the Yaque in that area, envisioning the site of the fording. 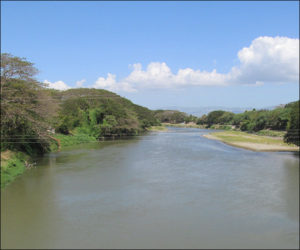