In early December 1494 (528 years ago), the Hieronymite friar Ramón Pané and the Franciscan friars Juan Leudelle and Juan de Tisín began preaching Christianity in the river valley surrounding the newly established Fort Magdalena. They soon kindled interest in the village of a local Macorix chieftain named Guanáoboconel, whose household numbered sixteen relatives and servants, including at least five sons, one named Guatícabanu. Guatícabanu would be baptized as Juan Mateo on September 21, 1496, the first recorded Christian baptism of a Taíno on “Española.”

Columbus and Caonabó includes scenes envisioning how Pané surmounted the language barrier to teach in Guanáoboconel’s village, the first baptism, and Pané’s instruction of Chief Guarionex, who would reject Christianity. In the first scene, Pané commences his missionary work by planting wheat seed in a garden plot granted by Guanáoboconel, setting a cross beside it, and then demonstrating how to make the garden fertile by worshipping Christ—just as Guanáoboconel’s family would have worshipped Yúcahu and Attabeira to make their yucca gardens fertile. Guatícabanu is drawn in, and after two months, he and Pané have the following conversation:

In early February, Fray Pané sought to advance Guatícabanu’s understanding to the threshold of Christianity. They sat before the altar cross, gazing at women roasting fish and fowl before a bohío nearby.

“Heavens,” Pané pronounced tentatively in Macorís, pointing to the sky, and then “earth,” touching the ground. Guatícabanu nodded that he understood.

Pané rose and solemnly cast his arm in every direction, pointing to the heavens and the earth, the sun, the forest and river, the village and its plaza, the fish and fowl cooking close by, and finally himself, Guatícabanu, and all the villagers in sight. In Macorís, he pronounced, “Heavens, sun, moon, earth, sea, men, fish, birds,” and then, with frustration in Catalan, twirling his forefinger in a circle, “everything. Absolutely everything.”

Guatícabanu pondered the words and gestures, searching for the greater concept he sensed Pané sought to express. He hesitated, and then ventured, “The heavens, sun, and moon above. The sea and fish below. The peoples, birds, and animals in between.”

“God,” Pané proclaimed, opening the palm of his hand as if to bestow a gift and then loudly repeating as best he could the boy’s last words. He thought to himself in Catalan, “God created heaven and earth and everything in them.”

Guatícabanu smiled knowingly, as if a riddle had been solved. The pale men understood their God-spirit had made the heavens, the earth, the sea, and all things in them. Other than the sea’s origin, the thought might supplement his own understandings. He replied deliberately, “I understand. God made the heavens for our spirits and the earth for its creatures, including men, so all may live in harmony.”

Pané understood enough to be pleased that Guatícabanu grasped an essence. Gratified, he reached into his robe, withdrew another leather string with a wooden cross, and lifted it over Guatícabanu’s head to lay it on his shoulders.

The following engraving (contained in Columbus and Caonabó) shows three friars evangelizing, taken from Philoponus, 1621, courtesy of the John Carter Brown Library, portion of rec. no. 04056-3. 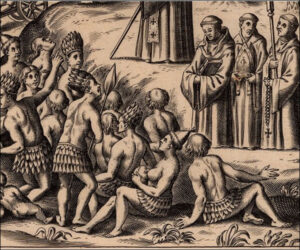