Margarite’s Disobedience and Expansion of Atrocities

Following Columbus’s departure for Cuba, Pedro Margarite promptly and openly disobeyed Columbus’s orders to: survey the island; attempt to establish the sovereigns’ dominion without triggering resistance; and capture Chief Caonabó. Instead, by early May 1494 (528 years ago), Margarite simply retreated his four hundred men back to the fertile valley at the Yaque River crossing sites along the trail to Isabela now cut, certain that the villages there could supply his soldiers ample food. Columbus and Caonabó dramatizes Margarite’s motives and contempt for both the settlement’s prospects and Columbus’s administration thereof.

No single Taíno village could provide food for the entire squadron, and Margarite’s soldiers were dispersed in villages miles east and west of his headquarters, as I approximate below in red on the map (contained in Columbus and Caonabó). 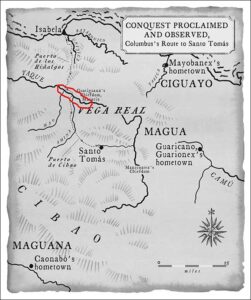 As depicted in the book, Margarite’s men soon began to demand food rather than barter for it and, when denied, to threaten punishment and loot it, sometimes followed by beatings or whippings. Soldiers demanded that local chieftains provide manservants and maids, and as the soldiers’ lust found fewer and fewer willing partners, they began to seize women for use as concubines. They also disparaged Taíno spirits and religious rites and seized and burned religious objects. The “peace” was kept by arms and the Taínos’ horror of horses.

Columbus wouldn’t learn of the disobedience until returning from his Cuban exploration at the end of September 1494. The soldiers’ misconduct fueled burgeoning Taíno hostility—as Columbus had feared—and Caonabó’s effort to establish the chieftains’ alliance to expel the Europeans from the island.