Last week, I traveled to sites in the Lesser Antilles where events occurred during Columbus’s second voyage that I’m depicting in the sequel to Encounters Unforeseen, which will dramatize the history of 1493–1498 through the eyes of the same Taíno and European protagonists. The trip’s principal focus was to study the encounters between European and Kalinago (Carib) peoples in November 1493.

The first island Columbus sighted when his fleet reached the Caribbean (November 3, 1493) was called Ouitoucoubouli by the Kalinago, meaning “tall is her body,” and Kalinago peoples continue to live there today, including in the Kalinago Territory on the island’s east coast. Columbus named the island Dominica as it was a Sunday but didn’t find appropriate anchorage to disembark. I visited the Kalinago Territory’s cultural village (first photo below) and met with Faustulus Frederick, who served a term as chief of the territory and authored In Our Carib Indian Village (1971, with Elizabeth Shepherd), and Samanta Francis, my guide (both in second photo), who related their people’s culture. 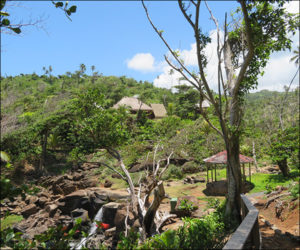 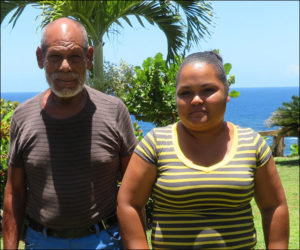 From Dominica, Columbus’s fleet sailed north to anchor a week (November 4–10) at the islands the Kalinago called Caloucaera and Couchoalaoua, which Columbus together named Guadalupe (Guadeloupe in French), fulfilling a promise he had made in June 1493 to friars of the Monastery of Santa María de Guadalupe in Spain. I examined the coves west of Trois-Rivières on the western island, Basse-Terre, where primary sources indicate the 1493 encounters occurred (third photo), including the black sand beach at Grande Anse (fourth photo, with my guide Taïna Tharsis of Guadeloupe Explor). Columbus revisited Guadeloupe in April 1496 when returning to Spain. 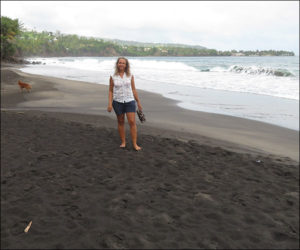 After Guadeloupe, Columbus’s fleet coursed northwest along the Lesser Antilles archipelago to arrive (November 14) at an estuary on the north side of an island the indigenous called Ayay, which he named Santa Cruz (St. Croix). He spent merely some hours at the estuary, Salt River Bay, where combat hostilities occurred. I kayaked to the site of the hostilities (behind me, in the shallows). 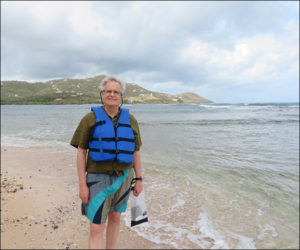 I’ll relate the substance of the encounters in posts this November, after completing my research.