A third of the men enlisted on Columbus’s second voyage grew seriously ill within days of La Isabela’s founding in January 1494 (see blog of January 6). As the expedition’s provisions exhausted, many men also hungered, reluctant to eat the food obtainable by bartering with Taínos in neighboring villages. Within weeks, over half were ill—modern epidemiologists speculate from dysentery caused by Caribbean and European bacteria or parasites and influenza borne by the fleet’s livestock. Some died of the illnesses or starved, and the photo below is of one of Isabela’s graveyards. 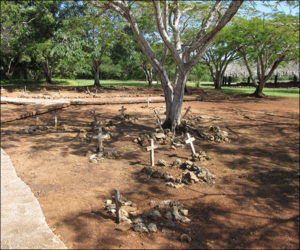 Encounters Unforeseen’s sequel will depict the decline in Isabela’s population. In February 1494, Columbus sent twelve of the seventeen ships and a portion of the voyagers back to Spain with an urgent request for a resupply fleet, and, while the historical record doesn’t provide precise numbers, the settlement fell perhaps from 1,200 to 900 persons. Columbus then dispatched an aggregate of over 500 men into Española’s interior to subjugate the Taíno population, including soldiers responsible for maintaining Fort Santo Tomás (see blog of March 17) and capturing Caonabó. On April 24, Columbus departed with three ships and almost 60 men to explore Cuba, thereby leaving Isabela with a population of over 300 persons. A resupply fleet of three ships with more settlers did arrive in June.

Columbus left Isabela’s governance and build out to a council while he reconnoitered Cuba, and the following photo shows the remains of the largest structure built, the storehouse for supplies imported and—rather optimistically—gold held for shipment to Queen Isabella and King Ferdinand (for the remains of the church and Columbus’s residence, see blog of January 6). 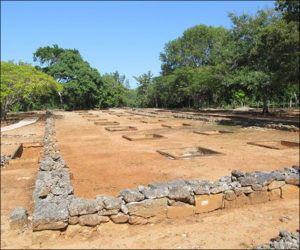