Fort Magdalena’s construction in December 1494 triggered Chief Caonabó’s decision to go to war. As depicted in Columbus and Caonabó, in January 1495 (528 years ago), he led warriors of his alliance to destroy Fort Santo Tomás, whose garrison then was commanded by Alonso de Hojeda, and Chief Guatiguaná led the alliance’s warriors to attack Fort Magdalena.

The Spaniards’ muskets, crossbows, and attack dogs, and a few mounted cavalrymen bearing lances, had greater range and effectiveness than the Taínos’ spears and arrows, and both forts held, repelling the initial attacks, whereupon the Taínos commenced sieges. Guatiguaná’s warriors did execute almost fifty of Margarite’s men who were living in Taíno villages along the Yaque and—with flaming arrows—burn much of Magdalena’s wooden walls to the ground. But Columbus’s men marched from Isabela to counterattack and relieve the fort within days, and Guatiguaná retreated.

More remote inland, Caonabó prepared for a protracted siege of Santo Tomás, and he and Hojeda would come to recognize each other from a distance.

The photo below is of fifteenth century Spanish musketry on display at the Faro a Colón (Columbus Lighthouse) in Santo Domingo, Dominican Republic. The illustration is of Taíno bows and spears taken from Philoponus, 1621, courtesy of the John Carter Brown Library, portion of rec. no. 04056-11. 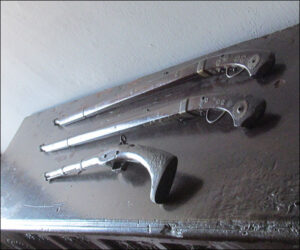 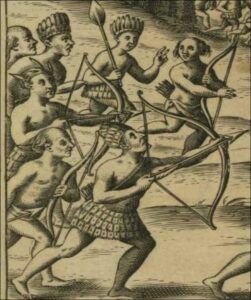